In therapy or in coaching, many sometimes encounter the advice to learn Positive Thinking, as a tool for transforming a self-sabotaging and draining negative thinking into something that supports and empowers.

Even if the intention behind this advice is a positive one, there never the less is a risk for an uncritical focus on positive thinking not being helpful at all, but rather that it leads to ignoring problems that may have to be confronted, and / or that it leads to feelings of guilt for thinking in negative terms.

A better term is therefore "True Thinking". This choice of wording points at the fact that negative thinking sometimes can be based on erroneous interpretations of reality, or that one imagines "a hidden meaning", or projects, one's preconceptions / fears / suspicions / interpretations into what one sees and hears from others.

Learning how to just become aware of unrealistic negative thinking is therefore an important first step. What one may benefit from learning next, is how to use both one's brain and heart in order to be able to perceive reality with awareness, in a realistic way, without preconceived judgment. In order to using "True Thinking" for being able to act in a conscious way, sense-fully, maturely, instead of re-acting out of emotional conditioned reflexes.

For those with a spiritual focus, there is another variant of this video.
Posted by Lars Gimstedt at 5:24 AM No comments:

The Equation of Happiness 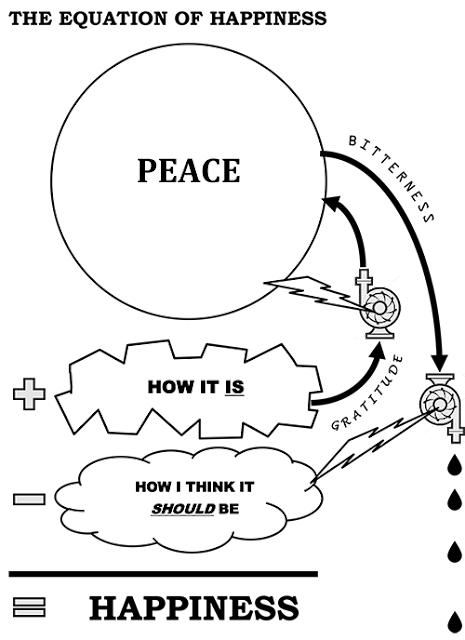 Happiness Research is an area that I as a psychotherapist of course have been trying to follow, as I meet many unhappy persons in my job.
Much of what has been written about this field of research I have found to be interesting, but unfortunately not very useful. The definition of the term “happiness” itself also varies a lot, and much of what I have found only really describes those things people strive for, in the belief that they will bring them happiness, but which in the long run do not – prosperity, social status, celebrity, a well-trained body, etc.
But, when I a while ago came across a blog entry from a British GP, one that I felt presented a concise and useful definition of “happiness”, I felt that I finally had found something useful. His definition was “Happiness is inversely proportional to the difference between how I think life should be and how it is.”
In the image above I have further developed this simple definition with a couple of additional factors, which I believe have an impact on our experience of being happy. The factors involved can be described in this way
So, in summary: I think we most of the time have access to what we need in order to achieve a sense of happiness and contentedness.


We can by ourselves influence each one of the factors that build up or wear down our happiness:
1. Inner peace, 2. Our own life, 3. Our expectations and goals, 4. Gratitude
and 5. Bitterness.


Posted by Lars Gimstedt at 4:52 AM No comments:

A talk about Self-actualization on a life style convention in Stockholm.

At the largest life style convention in Scandinavia, Allt För Hälsan, November 6 to 9 2014, the Swedish Psychosynthesis Association Psykosyntesförbundet will have a display stand.

A number of Psychosynthesis coaches and therapists will talk each day about different subjects. Among these, I will have a presentation around the Psychosynthesis concept The Self -
Find your Self. Ten steps towards self-actualization:

Posted by Lars Gimstedt at 1:02 AM No comments:

I "returned" last fall to a fork in my life path, something that happened that made me change my profession from engineer to psychotherapist 25 years ago - a kick turn from forty years of atheism into becoming a believer. The fork in the road was reading the book A Course in Miracles (ACIM), and this eventually led me into Transpersonal Psychology ("transpersonal"=beyond/over the personality), and led to that I undertook professional training at the Psychosynthesis Academy in Stockhom, Sweden.

I "returned" by offering a new e-course on the Psychosynthesis Forum web site, A Psychosynthesis Perspective on ACIM. When I wrote the e-course I re-read the book, and I felt that I read it with new eyes.

After having made the e-course, I got an impulse to write an in part self-biographic book about ACIM. It is titled Stairway: 10 Steps to Heaven, and is an adventure story in science-fiction format.

Now I finally come to the issue of this blog entry: how it is to publish a book today.

I was a complete novice as a writer and as a publisher, so I started by mailing all Swedish publishing houses within New Age. Some answered, most of them declined, some offered to review my book, but this would cost 300 USD. The printing of a preliminary edition would cost 2 - to 3000 USD. Unreasonable costs for a lone entrepeneur...

I then investigated Amazon's Print-on-demand and e-book publishing, and I experienced a revelation. I uploaded my word file, was led through a simple editing program for formatting into a proper pocket book format, designed the book cover with another easily understandable program, and published the book through my own publishing company, both in English and in Swedish. All this took me one week and did not cost anything. Amazon gets paid through 30% provision when the book is sold, and the printed edition is printed after purchase. I ordered ten copies and got them sent from England to Sweden in three days!

Here is an image of the cover, folded out so that the backside is to the left. 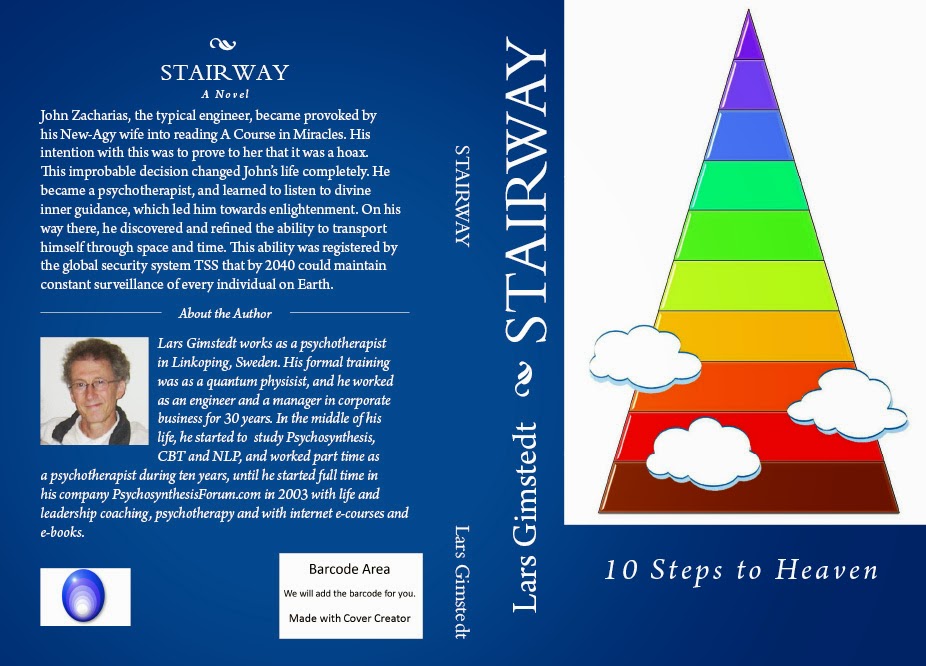 I have a hard time understanding how the traditional publishing companies are going to be able to compete with this...

I started to write the book in the middle of January 2014, and mid April it was published in two languages and is marketed on all Amazon sites plus on PsychosnthesisForum.com, after three months.

If you are nurturing thoughts about becoming a writer - check with me for advice.

Posted by Lars Gimstedt at 5:59 AM No comments:

My former Psychosynthesis tutor Margo Russell often reminded us that Psychosynthesis is a humanistic and positive psychology, with focus on the healthy and strong in man. She emphasized the importance of developing “bifocal vision”: the ability to see the “outer shell” of a person and to see “behind” as well, the ability to see the inner, the human, the potential, even when the “outer shell” has negative and destructive traits.

This can be regarded as a form of positive thinking, wanting to see the good in everyone.

This can be interpreted as a warning against adhering so singlemindedly to positive thinking that the negative becomes “forbidden”, and thereby gets suppressed from the conscious mind. People ending up here risk getting into trouble due to their naïveté, and in the roles of therapist, medical doctor, or other roles where they are to help others, they can even cause damage.

In order to explain why positive expressions are more efficient than using negative expressions, I will start with philosophizing about the function of language, illustrating this with the following picture:


The function of language is to produce an inner image (Symbol 4) inside the head of the person listening. This image is the result of an interpretation of what you have said (Symbol 3). The words that you pronounce are symbols (Symbol 2) for your inner image of what you are describing (Symbol 1), which in turn is a result of how you perceive reality.

The whole communication chain is thus

And one can say that language distances itself from reality four times over, which might explain why communication is so difficult, and why misunderstandings are so common…

So, if you want to influence somebody in doing something, or if you want to motivate someone for something, you should according to this model try to create a positive image in the head of the person, an image that makes the person feels attracted to and feels inclined to act on.

It is here that positive thinking, and a positive language, comes in. If you formulate a sentence containing negations, like not, never, hardly, etc, inevitably  an inner image of what you do not want to happen will be created. This image will not feel good, and a subconscious resistance may develop, like “selective deafness” (common among teenagers), suppression or some other type.

Reflect on the sentence “The dog does not chase the cat.” The inner image that came up in your head was most probably a dog chasing a cat, and then you had to think “and that is not so…”. The brain is not capable to create an image of the word not.

When you do this, positive and motivating images will be created in the head of the one listening.

We have the bad habit of using the word NOT.

Most of us have though the bad habit (= an automatic, learnt, and subconscious behavior) of using negations. If you are the parent of young children, it may be an enlightening “measurement” to count the number of NOTs you use during an hour together with the child…

Even if you mentally know that you are a victim of this negative habit, the only efficient way of changing it, so that you instead automatically use positive expressions, is to train in a persistent and conscious way.

Test this! You will discover how surprisingly hard it is, but I hope that you also discover how much better you can become in influencing and motivating!

If you want to work even more with efficient communication, test PsychosynthesisForums e-course BasicCommunication, and become a skilled communicator!